Meet Johanna Sapakie: Pole Choreographer To The Stars Of “Hustlers” 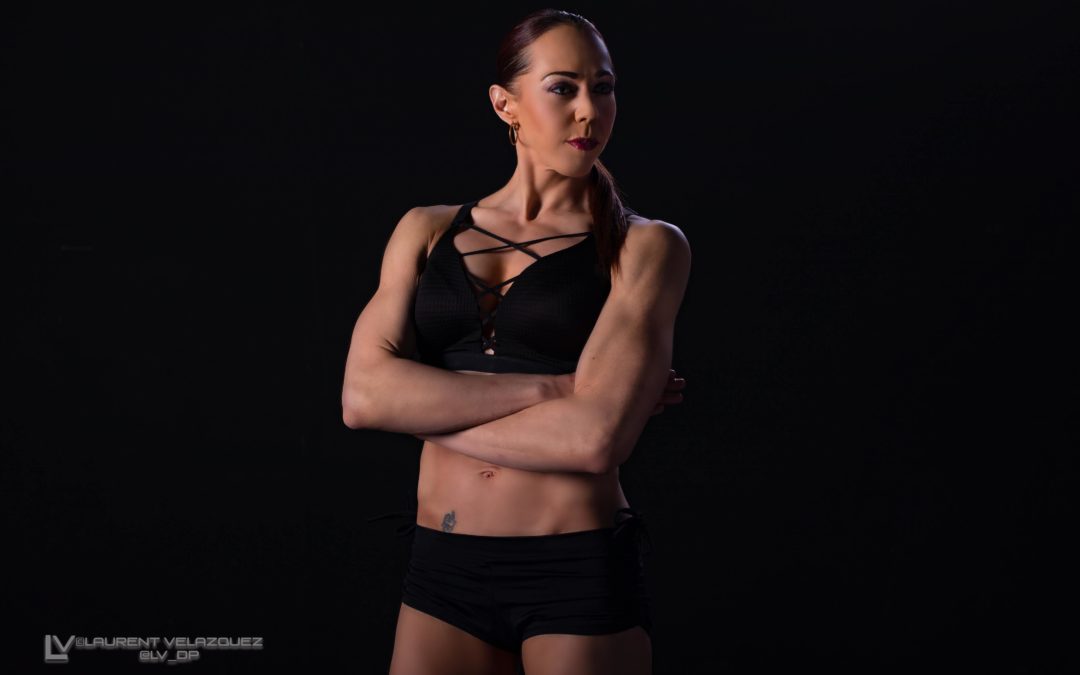 We are thrilled to introduce Johanna Sapakie, Pole Choreographer and Coach for the film “Hustlers”, which comes out September 13. Johanna is a longtime friend of Body & Pole (she goes way back with Kyra!) and we are beyond excited to host her this month for special “Hustlers”-themed classes and workshops. Keep reading for more about Johanna, what it was like training JLo, and why you won’t want to miss her while she’s on the schedule here at Body & Pole!

What is your dance background?

I trained as a young dancer in the classical forms of tap, ballet and jazz. As I grew into my teens, I discovered lyrical and contemporary and, perhaps most importantly, my love of choreography and artistic expression through movement. I began choreographing for myself and my friends when I was in my early teens and just never stopped playing with movement. Once I moved to LA, after high school, I was introduced to hip-hop and the commercial dance scene. I have always had a desire to be a ‘Jack of All Trades’ and have been fortunate enough to have a career spanning many diverse aspects of the dance world and its many genres.

How did you get into choreography?

I was always really interested in creating my own movement from a very early age. I loved putting on music and just seeing what emerged from my body and through my emotions. For me, choreography has consistently stayed a means of therapeutic expression and purposeful use of emotions, regardless of where I am in my life. Once I found pole dance, it was a natural progression for me to want to explore my own movement capacity through choreography on the pole as well. I try not to classify myself as a hip-hop, ballet, commercial or pole dancer/choreographer. I am an artist who uses the medium of movement to speak to an audience. Whether it’s on camera or on stage, I try to let every genre and musical style allow movement to flow freely through me to generate something physical into being.

How did you first discover pole?

In my early 20’s, I was introduced to aerial acrobatics and absolutely fell in love with its combination of athleticism, artistry, beauty, and soaring potential. I loved the challenge of it all. Training and performing in this new discipline led me to jobs with different cirque-us companies and eventually led to 10 years working with Cirque du Soleil. Within just a few days of my first creation for my first show with CdS, I was introduced to acrobatic pole dance. While this type of skill didn’t end up being utilized in that show, I was so enchanted with pole that I avidly continued to pursue it as a new tool in my ‘skillset tool box’. This led me to many other pole jobs outside of CdS and, in fact, the next show I did for Cirque was as a featured pole dancer in a different show. 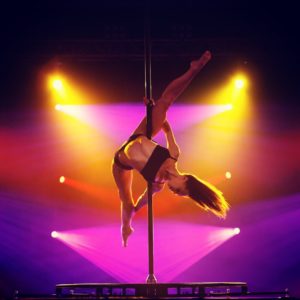 How did you land your role as Pole Choreographer and Coach for the movie “Hustlers”?

I am very familiar with Jennifer Lopez’s longtime choreographer/director duo, Nappytabs (Tabitha and Napolean D’umo), and have worked with them in the past on various projects. When the film “Hustlers” was on the table, Tabitha contacted me to discuss coming on board to train Jennifer for the movie. I seemed like a great fit for the job because it combined a lot of my skillsets into one project and because I have worked with Jennifer before. JLo and I have a similar dance background so I was able to easily communicate with her in a way she could assimilate quickly. I’m also well versed in working on camera and what movement looks best for the lens. Obviously, there was a choreography component in putting the pieces together for the major pole scenes in the film, but there was also a lot of attention paid to character development and making sure JLo’s movement quality was in line with the woman she is embodying in this movie. 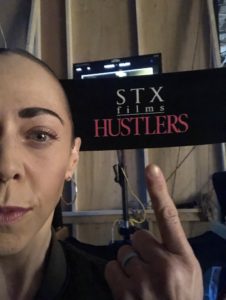 How did you prep “Hustlers” stars JLo, Constance Wu, Lili Reinhart and Keke Palmer for all of the pole work that would be required of them?

I spent the majority of my time working with JLo, as her character has an ultimate mastery of her own pole world and female game. We had portable poles set up in three different cities, Miami, LA and NYC. Jennifer is extremely busy, so over the course of about 2.5 months prior to the beginning of filming, I would fly to whatever city she was in and we would fit pole trainings into her schedule whenever we could find the time. The trainings really amped up in intensity as filming began in NYC. We zeroed in on the exact things she would need to know for her scenes and in fact choreographed a short routine to help introduce her character on screen to the audience. It was important that her movement on the pole be used to truly illustrate who this woman is to the viewers. I decided to stick with primarily spin pole movement, as it looks best on camera and you have less worry about angles being perfect and consistent in each take. At the same time, JLo was also putting in a lot of time with her personal trainer at the gym to continue working on building her upper body strength to handle all the new pole movement. She never shied away from the ‘pole kisses’ and bumps along the way that we all know we get when we are training hard. Her work ethic is intense and she is very determined to be amazing at everything she does! It makes her a joy to work with!

Constance began taking pole classes in LA prior to my working with her in NYC. Her character in the film is much more of a novice to pole dancing so we spent more of our time making sure she felt comfortable with the movement she was doing and giving her plenty of syllabus to pull from for her pole scenes. Unlike JLo, she doesn’t come from as strong a dance background, so the approach with her was different. We talked more about the way certain movements made you feel and how to best be comfortable with what she needed to do during filming.

With Lili and Keke, it was a little different as neither of them has any big pole dancing scenes that they were solely responsible for. With these two ladies, it was giving them the opportunity to have a play or two on the pole so they could really get inside their characters and have a better sense of how to transform themselves for their respective roles. Working with them was a relaxed atmosphere and more of a fun play session. Lili enjoyed it so much that she wanted to come back and have another go to learn a few more spins. She even got her first inverted outside leg hang! 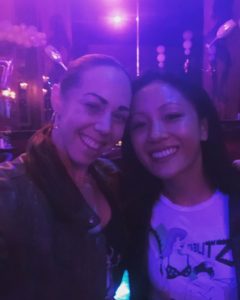 What are your favorite moves/techniques?

My biggest attraction to pole dancing is the combination of strength and aesthetic beauty. My favorite polers to watch are artists who seamlessly move through their positions with grace and connections. People like Marlo Fisken are just captivating to me, as her connections are effortless. Don’t get me wrong, I very much enjoy high-level difficulty, but transitions are everything! Watching someone defy gravity with their pole dancing is where it’s at! Oh, and anything where you get to really extend your lines is always a crowd teaser and heart pleaser 🙂

Can you share a couple tips for those just starting their pole journey?

My very best advice for anyone starting their pole journey is to TRULY drop your ego at the door and keep your minds and hearts open to the unfamiliar. Pole doesn’t feel like anything else you’ve done before. It’s new and exciting, but can be intimidating if you allow it to be — so simply don’t allow it. When we are children, the idea of instant perfection doesn’t yet exist because everything in our world is brand new. We have no preconceived notion that we should be good at something the first time we try it, because everything is being tried for the first time. When we begin to walk, we fall down and simply get up and try again. We don’t look around to wonder who saw us fall and what they thought about it. We practice until we achieve. We walk, then skip, then run. We must adopt this same attitude as adults and not worry about the need to be good right away. When trying something new, we WILL make mistakes. It is the nature of learning. Embrace the unfamiliar. Embrace the mistakes. Embrace the new information and eventually you will walk, then skip, then run.

What is your connection to Body & Pole?

I met Kyra a million years ago when we were both first starting out in Los Angeles together. We took many dance classes together and had lots of good, sweaty chats in hallways afterwards. When I began poling, I ended up in NYC for a job and wanted to have a play while I was in town. I reconnected with Kyra when I realized Body & Pole was her studio. I could NOT be more proud to know such a strong and entrepreneurial woman who has given countless artists the chance to live their best pole and aerial lives within her walls. It is a joy to watch her teach and once again be in a classroom with her. Her energy, and the energy of the community she has built, is a warm hug.

What are you up to next?

I am about to go to China to work for the Dragone company as the aerial choreographer for their new show in Wuxi and am looking forward to a few month’s new adventure in a brand new cultural space. I teach privates, semi privates, group classes and set choreography. You can always find me on Instagram @johannasapakiereal if you’d like to book something in Vegas or in a city near you in 2020!