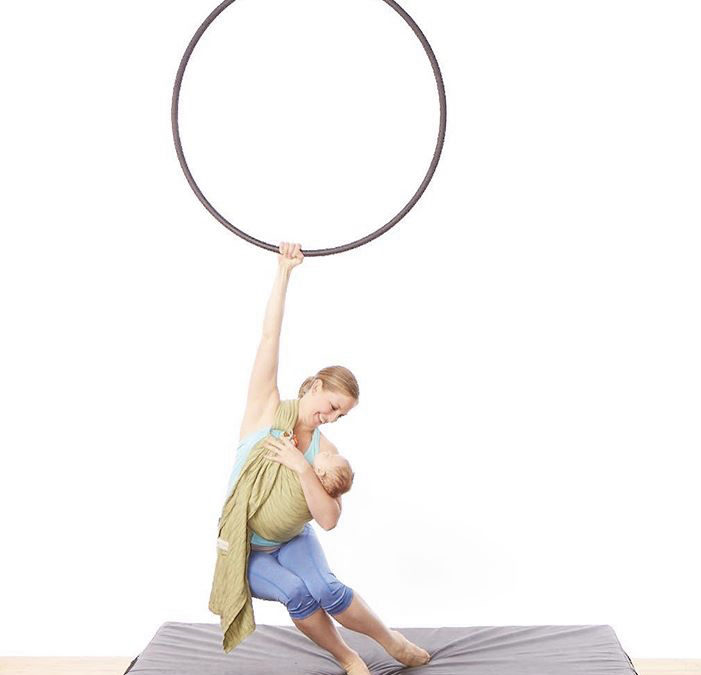 It’s a bittersweet time here at Body & Pole as we said farewell to the woman responsible for launching the Aerial Department at our studio, Jen James, earlier this month, as she’s moving to Arizona with her family. We bid adieu to her with a special feature celebrating her role with us, and as the mother of three children, just in time for Mother’s Day.

Can you tell us a little bit about your dance background and how you landed at Body & Pole?

I started dancing when I was young but didn’t focus on it until high school when I got into cheerleading and a new dance studio opened up with a more serious focus. I had intended to pursue dance in L.A. right after college, but instead I decided to try New York and focus on hip-hop before heading to L.A.  Clearly that didn’t happen!  I did perform for a few companies and had a decent amount of gigs but auditioning was never my strength.  In the mid 2000’s I started MIXT Dance, which is an event and entertainment company.  The same year, I met an aerialist who I trained with initially and who also gave me my first aerial gig. I fell in love with aerial but still loved dancing so much that I wanted to find ways to make both of those possible for me. I noticed that there was a difference in style between circus (tricks, wow factor) and my preferences which were to focus on fluidity and sequencing – more like dancing.  This led me to playing a lot in the hammock where I could be floor-based and easily transfer to the air and back to floor again.  But as you know, I like ALL the apparatus…if it spins, I want to create!

After I started doing aerial, I re-connected with Kyra (I had known her from early in my career) and this was about the same time she had gotten into pole. We combined our disciplines and created some amazing pieces and shows together, along with her husband Kyle.  That was the beginning of Aera Dance. Then, when Body & Pole moved from its 5th avenue location to where we are now on 27th street, Lian & Kyra decided to expand to include aerial as well as pole, and I made that happen.

How did you initiate bringing aerial to BP?

First, I made sure that we had the physical structure and spacing in order to accommodate it. I designed the rigging spacing (initially, we only had the 2nd floor of what is now the studio) and came up with what I thought was appropriate for class sizes and class structures, always keeping in mind safe practices with excellent instruction.

Was there anything else in the aerial space at that time?

There were circus programs but in terms of more recreational classes that were marketed to adults, there wasn’t really anything of its kind. I think Body & Pole was definitely one of the first to provide aerial within the pole community and really support the system and develop a program.

Switching gears a bit, you have three children, how old are they?

Did being pregnant and having children impact your aerial work (teaching and performing?)?

Aerial is my happy place – I was so grateful to be able to continue it through the majority of my pregnancies.  I was fortunate to have had pretty easy pregnancies (lack of morning sickness, minimal pain) so I was able to teach until 8months or so for all of my classes. I was able to perform while pregnant, too! With the first baby, it was just showcases but #2 and #3 have a little money in their bank account from working at The Box.

When it comes to performing there have been a few changes too.  I find that I actually get dizzy (never happened prior to kids) and must lay down and drink a lot of water if I’m performing ambient sets longer than 8 minutes. I also realized that I’m more risk averse…as we’ve added family members, I find myself less likely to take risks in the sense of higher heights and bigger drops.

What did being pregnant teach you about your body and/or your skill?

The biggest thing was an appreciation for different body types – as my body changed shape, I truly felt the differences when hips were wider, weight was heavier, balance shifted, etc.  I was able to appreciate those differences and I believe it helped me to direct cueing in alternative yet safe and effective ways.

We are so sad to lose you at Body & Pole. What is up next for you?

We are moving to Arizona, where I grew up. It’s going to be a whole new adventure. I am planning to continue aerial there, but I don’t have a super set plan just yet.  Fortunately, Las Vegas and Los Angeles are not that far. This momma does not want to stop performing!

What is something you learned about yourself while training/teaching at BP?

Aside from the cliché, (“your body is a tool”), the satisfaction you get out of people making progress is so huge.

I’ve learned to love, to let go, to applaud ALL successes, to appreciate and learn from failure, to acknowledge when things must change, and to stay positive as much as possible.

What will you miss the most about Body & Pole/NYC?

PEOPLE! If you surround yourself with people you enjoy being with, it’s hard to let go of that.

We would love to stay in touch! Where can our students find you to follow along your next adventure?

You can find me at @jennifer.james.125 on Facebook and @jenjamesmartin on Instagram. I don’t want to be a stranger. I’m hoping to come back to NYC and create more work too.