Meet Mariangela Ciccone, the Woman Behind Our Events 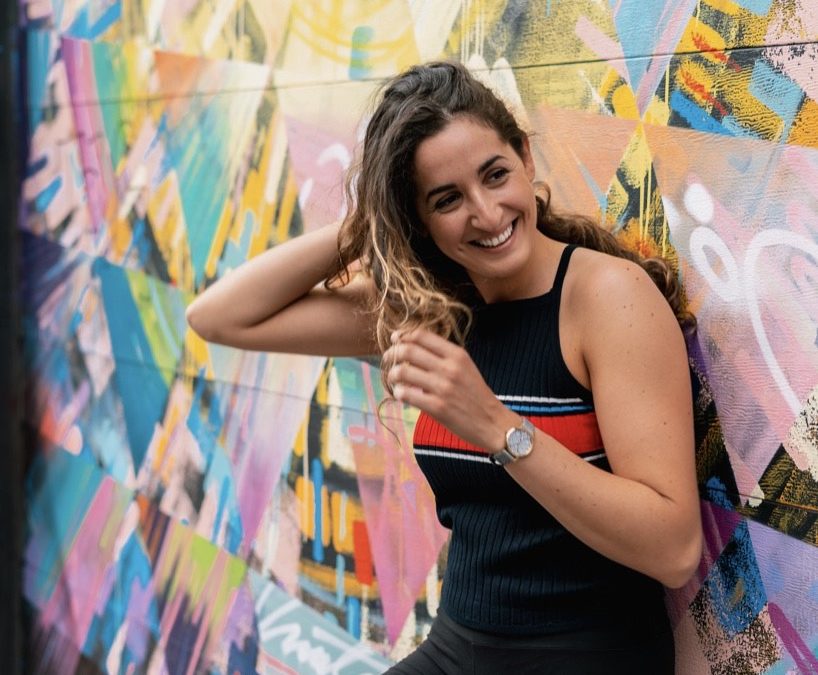 Meet Mariangela Ciccone, the woman behind our events here at Body & Pole! After having discovered aerial dance by pure chance while she was visiting her native Italy, she eventually found Body & Pole to continue her practice when she came back stateside, and hasn’t looked back since. She completed our work-study program earlier this year (technically graduating early)!, she also has a degree in Events Management, where she’s worked on numerous art, corporate, fashion and charity events. She loves being able to combine her passion for aerial dance with her professional experience. And just because you don’t see her performing at the events she’s working on doesn’t mean she isn’t doing a TON behind the scenes!

Tell us a little bit about yourself:

I was born and raised in a small city called L’Aquila, about an hour outside of Rome. I went to university in Italy (and did a year abroad in Barcelona), where I got my degree in Art Management. When I graduated in 2013, I got into a post-grad program in event management here in NYC. The program was supposed to be 6 months long, including an internship, and I’m still here 6 years later! After I graduated from the program, I spent 5 years as an Event Manager and Art Director mostly working with art galleries, corporations, fashion shows, and a lot of non-profits.

How did you discover aerial dance?

I discovered aerial dance by chance. I didn’t grow up dancing but was a competitive swimmer for over 10 years. A couple years ago, I was in Italy for a few months, and during that time my grandfather passed away and I was looking for something to do to get my mind off things, and I happened to walk by this small studio in my home city. It was there that I was introduced to aerial dance – silks and trapeze – and after three months of training, I was invited to be in one of their shows! When I eventually came back to NYC, I needed to find a place where I could keep up with my practice, and that’s when I found Body & Pole.

How did your swimming background influence your ability to pick up aerial dance?

Swimming gave me so much discipline in every aspect of my life – it’s solitary sport – and due to the nature of being in water, you don’t have the distraction of music or other people. Swimming helped me understand my limits but also gave me the tools to overcome them. It forced me to learn so much about myself — it taught me a lot about my body, what I like to do, and who I am. In some sense, aerial dance is kind of the same – unless you’re doing a group piece, you are mostly by yourself. It can be very challenging. Thankfully, we have the ability to play music with aerial though! Swimming also gave me the upper body strength that most women lack, so for me, climbing and inversions were easier.

What inspired you to become a work-study?

I wanted to combine my passion for the aerial arts and my professional background and experience in events and art. My goal was to be an art director for live events and produce shows. The work-study program is definitely not easy, and is definitely for people with clear goals and who can make the commitment. It’s not part-time thing. I have learned through this program that I sometimes underestimate myself and my capabilities. I realized that I am very good under stressful situations. Again, the self-discipline from swimming helped – for me, the work-study program was absolutely amazing and I would do it again and again. Fun fact: I actually never graduated from the program (because I was hired by Body & Pole!). I was supposed to graduate this past June, but was hired in February to be Body & Pole’s Events Manager.

What are some of your favorite events that you’ve worked on here at Body & Pole?

My favorite event is definitely “The Wall”, Body & Pole’s art gallery opening. I worked on the events with photographer Michel LeRoy and comedian/artist/stripper Jacq the Stripper, and we have a new artist coming up next month! It was especially fun to combine my art background with my work at Body & Pole. I also loved the whole process that brought us to participate in our first time at Summer Streets this past summer. We had to plan early – we applied in March, and it took a few months to even get approved. They assigned us to Foley Square by the Brooklyn Bridge. They gave us one hour to perform. I had to put the whole thing together as an art director so I was coordinating all the creative parts – and working with the organizers of summer streets. Most recently, I worked on Body and Pole’s annual Halloween Show “Exquisite Corpse”. I like the Halloween show because it’s huge and it’s also immersive (the audience is part of the show) – it’s more interactive and there’s an element of surprise everywhere. It’s a lot of work – it’s three different shows, made of three different performances, that are happening simultaneously. It’s a lot like a three ring circus! I like that the events I work on for Body & Pole combine my experience with corporate and artistic events  — if you want to do events or work in the art/entertainment/events world, it helps to have a diverse background, so I can easily switch gears between talking with corporations and artists, which requires completely communication skills. 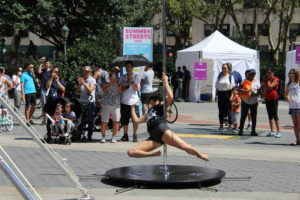 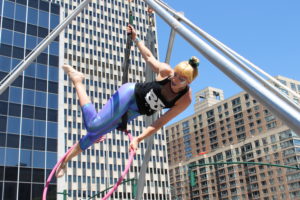 Are there any special skills you’ve had to hone specifically for aerial events?

It’s a learning process, because producing aerial events is so different from what I do in my role as an art director for other types of events. For one, you have to audition and choose people to be part of the show. There are some aspects (like music, lighting, and acoustics) that I don’t have to think about for other types of events. For aerial shows, there’s also the “inconvenience” of the apparatus –  you have to consider rigging and the space that the apparatus takes up, as well as safety.

Speaking of aerial events, tell us about your upcoming show this month!

I’m so excited to encore “Showtime!”, an MTA-inspired production that I created last year with a bunch of Body & Pole work-studies. We first produced “Showtime!” at Body & Pole last December, and we’re bringing it back this year at Drom in the East Village on November 16 (tickets available here). The title is inspired by the guys who come though the train and shout “what time is it? It’s showtime”. Our show represents all the different characters who come together every day in the NYC subway system. Each act is at a different subway stop – inspired by real life characters that we have all seen—the churro woman, the person crying (come on, we’ve all had a meltdown on the subway at some point!). This year’s show will feature the most famous creature of the subway system – I just want to say pizza, and you can probably figure it out! We’ll also have burlesque, featuring Gal Friday, another former work-study. Also performing: Sam Marsh (former work-study and instructor), Kyla Ranney (instructor), Alex Hernandez (former work-study), Kira Fath (instructor), Tamara (scholarship recipient), as well as a couple of Body & Pole clients. The other two co-producers are also former work-studies: Abigail Williams and Donna Carnow (who’s now an instructor). Last year was such a success, and I can’t wait to it again! 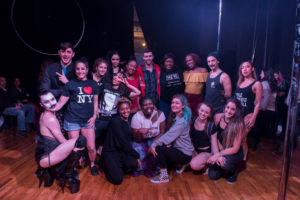 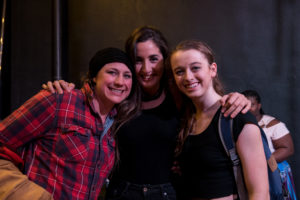